When I was an intern with the cardiac service of CW Lillehei at the University of Minnesota. Dr Lillehei had just performed a surgery on a 16 year old girl with a Tetralogy of Fallot (a congenital heart defect). Being 16, Maria was unusually old for this type of surgery as most children with this condition who are left untreated typically would die from the disease before reaching adolescence.

Maria had severe heart failure when she came to us for treatment. It was a very risky surgery for her, which at 16 and extremely ill, had very low chances of survival. I was the intern on the case and followed her into the coronary care unit after the surgery. She suffered 260 cardiac arrests over the first week (I believe a record). For this reason, I stayed with her day and night, addressing each and every cardiac arrest episode as quickly and as efficiently as possible. She was fearful if I ever left her room, even for a bathroom break. I ate my meals beside her and slept in the adjacent bed next to her if it was not occupied, or on the floor, or in a chair.

After the multiple cardiac arrests, her chest wound incision (the mediastinum incision from the base of her neck to the bottom of her breast bone), could not tolerate the repeated cardiac compression episodes and electric shocks for defibrillation, and the chest wound eventually opened up, exposing her heart. When she would sit up, her heart came out of her chest. Eventually, the heart became infected and I was assigned the job of washing out the chest cavity, putting my gloved hand into the chest and breaking up pockets of pus that formed around the heart and great vessels. The process of clearing up the infection went on for many months and eventually another intern took over that responsibility.

I always dropped by to see her, to talk to her, to tell her jokes as her English improved, and to hold her hand. Her English was quite poor in the early days of her hospital stay, but we communicated nonetheless. I don’t remember precisely how long she was in the hospital, 7 to 9 months is my best guess, but I do remember receiving my first letter from her about a year later. It was a letter of thanks and gratitude. She eventually returned to Greece, a frail and skinny girl with tremendous fortitude, to live and love life. 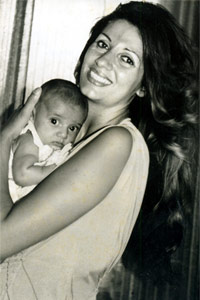 I found out that she put on some weight and eventually entered the Miss Universe pageant competing for Miss Greece, where she was one of the finalists. She went to college, formed her own school after college, taught English, married, and gave birth to a daughter in 1978. She wrote to me every Christmas in the earlier years and I looked forward to her letters. As the years passed by, life got busier and the letters became infrequent until eventually they stopped altogether. Going through a pile of old family photographs I came across a picture of her with a note on the back dated 1978. It was a picture of her smiling as she held her baby girl. She radiated with beauty inside and out.

I tried to reach out to her after finding this photo and was fortunate to locate her sister, who now lives in northern Minnesota. I was informed of the details of her hard won life, her becoming a finalist in the Miss Universe Pageant, her love for her students and of teaching, and the unfortunate details of her death in 1985 from complications of pneumonia.

The memories of my time with Maria in that hospital room and her struggle compelled me to share this with you. Maria gave back so much and touched the lives of countess people in the 18 years she lived since her surgery. Life is truly a gift that is worth fighting for and one should never give up despite the odds. If you ever feel overwhelmed at life and the tide is against you, just remember this story.

Scientists Cure Dandruff?
In the News - Bald Chimp Looks Human, Still Throws Feces
Why Does Society Put Such Emphasis on Hair?
My Beard Hairs Fuse Together
Eyebrow Hair Loss After Tattooing
Graying Body Hair
Get a virtual consultation with Dr. William Rassman and Dr. Jae Pak for hair loss options. You can learn more by scheduling an appointment.