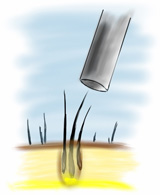 There is a question arising out of the hair transplant community which is becoming polarized and lining up for a fight: Which is better, FUT (Follicular Unit Transplant with Strip) or FUE (Follicular Unit Extraction)? Some doctors have already specialized in performing FUE alone, so their opinion is already made up. Some doctors new to the business entered the FUE market having never done an FUT strip procedure. That means that the nuances of quality control have not been learned (tricks to prevent graft damage from manipulation and drying).

I have had the opportunity to speak with some of these new doctors and they reported a substantial failure rate in their initial patients, but with time, they learned how to prevent damage and minimize transection of the grafts, and their results progressively got better. Their decisions on becoming hair transplant surgeons were initially made from a business mindset, under the assumption that the market demand would be there as they learned the process. This assumption is what actually happened. They also made the assumptions that the FUE technique would eventually be as good as the FUT technique over time. Again, this was a business, not a medical decision, and only time will tell these doctors if the quality of their work has met the needs of the patients. 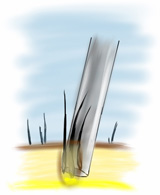 The long term results with FUE (particularly on donor area damage in extensive FUE grafting) is not yet in. When we introduced the FUE technique in 2002 at the international meeting and in the Journal of Dermatological Surgery, there was not too much of an initial reaction, because the doctors who tried it quickly failed to get good quality grafts out. I remember two doctors in particular (names withheld) — one called me the first day after I returned from the meeting and I spent an hour on the phone explaining the subtle nuances that made it work for us. He thanked me, then quickly announced his new “pioneering invention”, the FUE technique, both on his website and through various press releases. Clearly he did not have the time to do more than one procedure and I felt sorry for that patient, a victim of a doctor’s greed for fame and money.

Another doctor who came out and quickly started offering FUE was more subtle about it, and it took longer to establish a presence in the market. His initial work produced many failures, some of which I saw in consultations in my office, and much of it through emails with pictures I received from the victims. For some doctors, FUE is about money and not about patient welfare. 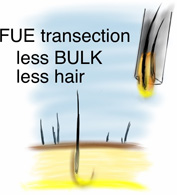 I predict that the history of FUE will parallel the history of the FUT strip procedure, which we pioneered in the early 1990s. As the FUT strip surgery caught on and as more and more doctors offered the procedure, performing the surgery on patient after patient, they too found that the initial results produced a high failure and complication rate. It took years to learn (1) how to get growth, (2) how to increase the number of grafts extracted and implanted safely in one session, and (3) how to avoid the terrible scar and donor wound complications (the worst being gangrene of the donor area). These three “HOW TOs” are the same issues with FUE that we are now confronted with. Only time will tell us what results we will get and only doctors who do both procedures will be in the best position to judge this comparison today.

Dr. Robert Bernstein (who also co-authored our original work on FUE), has since purchased and installed an FUE robot (Artas® System), which puts him in a unique position to draw conclusions to the question, “Which is Better, FUE or FUT?” He wrote the following text, which I totally agree with:

“I explain to patients that FUT (via strip) will give the best cosmetic results (more volume) since the grafts are of better quality (when using microscopic dissection, there is less transection and more surrounding tissue to protect the grafts) and better graft selection (the grafts can all be harvested from the mid-portion of the permanent zone) In contrast, in FUE you need approximately 5 times the area. Because of this large donor area requirement, some of the hair must be harvested from fringe areas and thus the hair will be less stable genetically. I relate that with subsequent FUT procedures we remove the first scar, but with subsequent FUE sessions we are adding additional scars, so over the long-term the cumulative scarring over large areas can present its own problems of visibility.”

“I explain that the main advantage of FUE is to have the option of wearing your hair very short (but not shaved). FUE is also appropriate for patients who are at risk for a widened donor scar (i.e., very athletic and muscular or with thin, tight scalps etc.). I relate to patients that, in my experience, Robotic FUE is superior to other FUE methods in that it is much more accurate and more consistent. It enables the doctor to extract grafts with less damage than with hand-held instruments or other automated devices.” 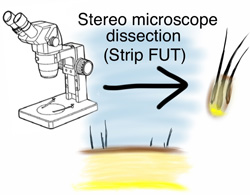 Dr. Bernstein, like the editors of this blog and other good doctors, focus on quality care, safety, integrity, and discussing a balanced view of the FUE vs FUT discussion with the patient. When presented to the patient considering this decision, we call this “informed consent” and it not only reflects basic courtesy and respect shown to the patient, it is a requirement of the laws of most states and countries.

The patient must be presented a balanced view of the risks vs rewards of any procedure offered and the alternatives available to him/her. There are many good doctors who share these views.

Talk to a doctor

Hair Transplant Surgery Looks Painful!
Patient Results - 4149 Grafts Restored His Hairline (with Photos)
Going Through Menopause and Losing Pubic Hair
HIV and Hair Transplants
Will a Hair Transplant Increase Propecia Efficacy?
Transplanting a Norwood Class 2 to a Class 1?
Get a virtual consultation with Dr. William Rassman and Dr. Jae Pak for hair loss options. You can learn more by scheduling an appointment.