The Norwood 2 classification is a mature hairline with no evidence of balding. Being a Norwood 2 doesn’t suggest that you won’t ever go bald, but rather that your hairline is currently healthy and that you’re likely not a good candidate for a hair transplant.
(310) 553-9113
Text Us
Virtual Consult

What is a Norwood 2?

The framing of the face changes as a hairline recedes superiorly and laterally. Children initially have a hairline that is practically concave in shape (Norwood 1). The maturation of males and their hairlines is well studied, mainly because of the social impact of balding that starts in most men in their late teens or early 20s.

Below is a Norwood 2 hairline. Notice the temples are not covered by hair. There is slight recession past the temples, though typically not enough to warrant a hair transplant procedure. Although not as prominent and angular on this patient, the widow’s peak persists at the front of the hairline. 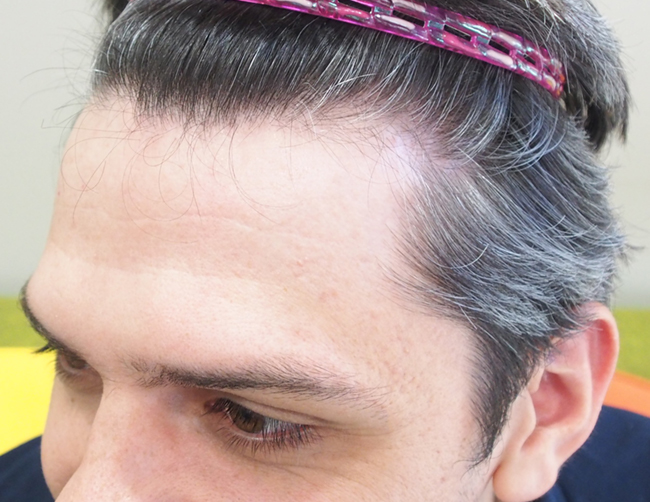 Although rare, some men retain their juvenile hairlines for some time. For most men, recession begins at the temples, slowly advancing into a Norwood 3 pattern. Occasionally, the frontal area of the scalp will retain most of its hair; we refer to this as a “persistent forelock”. David Letterman toward the end of his tenure as Late Night talk show host is a good example of this persistent forelock pattern.

Most young men experience some concern about their hairlines as they enter their 20s (or 30s, if they’ve retained a full hairline up to that point). It is common for men to over-analyze their hairlines, scrutinizing every perceived change in the hairline. Although it is not completely trivial to do so, a Norwood 2 is a healthy, mature hairline that is not a good candidate for hair transplantation.

Come visit an Open House. Meet real patients who have undergone an SMP procedure. See real results in person, share your questions and concerns, and get feedback from those who have been through the struggle of hair loss.