The follicular unit is a unique anatomical unit containing between 1-4 hairs each and it is surrounded by a capsule that isolates the hairs from the surrounding dermis and fat.

Schedule Virtual Consultation
If you would like to schedule a consultation with Dr. Jae Pak, please click on this link: Jae Pak MD Medical
*NHI Medical is no longer available for consultations or procedures.
Menu

The follicular unit is a unique anatomical unit containing between 1-4 hairs each and it is surrounded by a capsule that isolates the hairs from the surrounding dermis and fat. This capsule is called the outer root sheath (ORS) and extends to the surface of the skin to produce the pore the hair exists from. When we extract a follicular unit from the scalp using the strip harvesting method, for example, this outer root sheath is included in the graft. All of the vital structures of the follicular unit lie encased in this ORS.

At the bottom of the bulb of the hair, lies a structure called the dermal papillae (DP). The hair bulb looks like a catcher’s mitt from the bottom, and the DP is the ball inside the mitt. The DP contains the master switch that controls the hair growth genetically. Cells inside the DP express the genetics that initiates the hair growth process and is integrally involved in the various stages of the hair cycle. In the photo below (at right), we see two hairs, one fully developed (terminal) hair and one small hair that is growing out of its telogen (resting) phase into its anagen (growth) phase, evolving into a mature terminal hair. Note that the telogen hair produces a finer hair while the hair is growing. This hair will get thicker as the hair matures into its ‘terminal’ status. The bulb at the bottom of the telogen hair stands out prominently as it does in the mature terminal hair but the DP can not be seen without special stains or equipment. 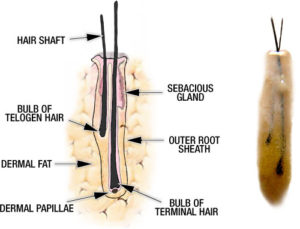 Above: Shematic drawing of a two hair graft with all elements of the anatomy labeled (on left). The photo on the right shows an actual mirror image of this schematic drawing. Note the similarity between the diagram and the photograph. 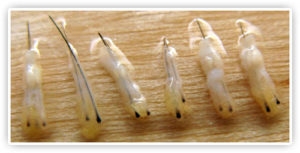 Above: Photo of 2 and 3 hair grafts taken with the strip method of harvesting. Note the uniformity of the grafts, the visibility of the sebaceous gland near the top of the grafts and the presence of fat below the graft. These are all viable grafts that should have a 100% growth rate.

With traditional Follicular Unit Extraction (FUE) grafting, the hairs are pulled out (like a banana being pulled out of its skin from one end) and the grafts may be stripped of their outer root sheath (ORS). If that happens, the hairs may lose the dermal papillae and possibly the bulb as well. The good news is that most of the growth elements of the mature terminal hair shaft are multifocal (have more than one site controlling the growth) so hair bulbs and dermal papillae cells that may be damaged may still produce full terminal hair, albeit less thick. The two strongest growth areas of the mature terminal hair include (a) the dermal papillae and (b) the area near the insertion of the tiny muscle attached to the hair in the vicinity of the sebaceous gland. Any damage to the growing hair will produce a weaker and thinner hair or possibly minimal grown. The research to show the damage to a follicular unit stripped of its dermal papillae and its ORS has not been well documented, but the conclusions drawn here are logically based upon the science of hair growth as we know it.