Removing the donor tissue as a single strip is a critical component of Follicular Unit Transplantation because, in this way, the naturally occurring follicular units can be preserved and damage to the individual follicles prevented.
(800) NEW-HAIR
Text Us
Schedule Virtual Consultation
If you would like to schedule a consultation with Dr. Jae Pak, please click on this link: Jae Pak MD Medical
*NHI Medical is no longer available for consultations or procedures.
Menu

Removing the donor tissue as a single strip is a critical component of Follicular Unit Transplantation because, in this way, the naturally occurring follicular units can be preserved and damage to the individual follicles prevented.

Hair Transplantation began in the United States in the late 1950’s. Since the field was new, the tools that were used were adapted from other procedures that dermatologists commonly performed at the time. One of the most popular instruments was a circular cookie-cutter like device called a punch that was used for biopsies and for removing small pieces of tissue. Since it was readily available, it soon became the standard way that doctors removed donor tissue from the back of the scalp for the transplant. This hair bearing tissue removed by the punch was referred to as a “plug”.

Since these plugs were large, skin had to be removed from the front of the scalp (the recipient area) to make room for them. In fact, the same punch used to remove tissue from the back of the scalp was also used to remove bald skin from the front. In effect, circles of bald skin from the front of the head were cut out and replaced with hair bearing skin from the back. This was called the “Punch Graft Technique” and was the standard way in which all hair transplants were performed for many years. It was responsible for the typical “corn row” look that people commonly associate with the older hair transplants. 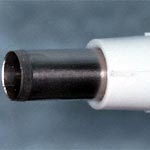 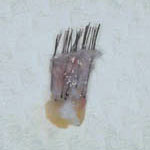 A 4-mm punch graft, commonly referred to as a plug. 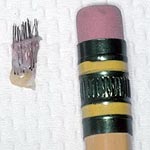 Comparison of standard round graft to a pencil eraser. 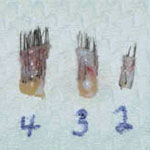 Punch grafts measuring 4-mm, 3-mm, and 2-mm. Note that as the grafts get smaller the percentage of transected (damaged) hairs increases.

There were, of course, many problems with the technique. The most obvious was that the 4-mm plugs did not look natural, since they contained from 15-35 hairs each and were almost the size of pencil erasers. A second, less obvious, but equally important problem was that the punches destroyed large amounts of hair. This happened because it was impossible for doctors to follow the exact angle of the hair when the plugs were being removed from the donor area, since they could not see below the surface of the skin as they made their cuts. When smaller punches were used to reduce the “pluggy look” caused by the larger punches; the problem of damage to the hair follicles (transection) grew worse.

The result of the punch technique was that often only a small portion of the hair actually grew in many of the plugs. Although it was assumed by the doctors using the punches that these plugs contained lots of hair, the roots of the hairs (the follicles) were cut off when they were removed from the donor area. Ironically these plugs, in which only some of the hair grew, looked less pluggy than when all the hair in the grafts “took”. An additional problem was that the hair follicles in the center of the larger plugs didn’t always get enough oxygen and failed to grow. This produced a small ring of hair around a bald center in a pattern referred to as “doughnutting”.

Although the failure of the hair to grow made the grafts look less pluggy, the techniques resulted in the permanent loss of precious donor hair that could never be recovered. Unfortunately for the unsuspecting patient, this resulted in long-term compromises in both coverage and in density since the donor supply was often completely used up long before the transplant process was completed.

Another problem was that the large wounds (holes) created by these punches necessitated that the procedure be performed in small sessions, usually 20 to 50 grafts at a sitting, with the sessions spaced apart in time due to the prolonged healing. As a result, one of the truly unfortunate problems was that neither the doctor nor the patient could anticipate the ultimate depletion of the patient’s donor supply, until it was too late.

Attempts at reducing the size of the grafts were largely unsuccessful. A reasonable approach to making these large plugs cosmetically more acceptable was to divide them into smaller grafts. Unfortunately, these only resulted in further manipulation and damage to grafts that already contained populations of transected hair follicles. Simply reducing the size of the punches was also a problem since, as we mentioned above, the decreased size greatly exaggerated the damage caused by even the slightest change in the angle of the punches.

The multiple-strip method of harvesting is accomplished by passing a series of parallel scalpel blades (the multi-bladed knife) through the donor area in the back of the scalp. This method of harvesting donor hair began as an attempt to avoid the open donor scars produced by the punch-graft method, and to decrease the transection of hair follicles produced by this “blind” harvesting technique. Unfortunately, it solved only the first of these two problems.

As with the punch-graft technique, the multiple-strip method was also a form of “blind-harvesting” since the surgeon would still have the problem of following the angle of hair in order to avoid cutting follicles and without the visibility to do so (just like with the punches). In addition, as one moved across the donor area, the fixed angle of the multiple blades and the pre-set spacing between them did not allow for any adjustments for the curve of the skull or for the changing hair direction in different parts of the scalp.

To compound the problem, pressure from one blade would distort the direction of hair near the others. The surgeon could adjust one blade (usually the upper) to follow the changing hair direction, but transection caused by the other blades would be unavoidable. The multi-bladed knife could contain up to 10 or more parallel blades, all causing irreparable damage to the follicles. 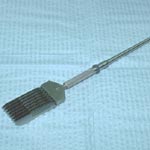 A multi-bladed knife loaded with 8 blades. 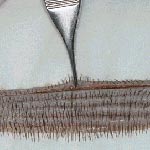 A donor strip harvested with a multi-bladed knife, cutting the strip into fine slivers as it is removed from the back of the scalp. Note: The follicular transection caused by the multiple blades cannot be appreciated at this magnification.

If these problems weren’t bad enough, as one tried to angle the knife, in order to follow the vertical curve of the scalp, some blades might be too superficial, while others too deep. The superficial wound required a second incision that ran the risk of further damage to the follicles. The deeper blade risked cutting fascia, the membrane over the muscle, and the larger blood vessels and nerves, sometimes causing persistent numbness in the back of the head.

A logical solution was to take a single strip of tissue from the donor area. The problem with this larger piece of tissue was that it was difficult to divide further. With the trend to perform larger sessions, the fine slivers produced by the multi-blade knife were especially appealing to the doctor since the more cumbersome single strip proved a hindrance to completing the surgery in a reasonable period of time. So, many doctors were willing to accept the damage caused by the multibladed knife to make it easier to do larger procedures more quickly. Of course, their patients were not told this.

There was still one last important problem with the multi-bladed knife, i.e. that the blades moved in random planes though the donor tissue. As we will soon discuss, hair doesn’t grow randomly in the donor area, or in the rest of the scalp for that matter, but in tightly organized bundles called follicular units. In effect then, the multi-bladed knife, even if it passed though the scalp perfectly aligned with, and parallel to, the growing hair, would still break up the integrity of these naturally occurring structures and reduce hair yield.

The significance of this last problem was not initially known, but it became apparent that transplanting very small grafts in large quantities, produced a thin look, and that this look was thinner than one would have anticipated based solely upon the amount of hair transplanted. The role of the multi-bladed knife in contributing to this problem is still in dispute, but these authors, as well as others, feel it to be substantial.

The solution to the problem of dividing up a single strip of donor tissue without causing damage to the hair follicles was to use a dissecting microscope. This important technique was introduced into the field of hair transplantation by a dermatologist from Texas, Dr. Bobby Limmer.

In single strip harvesting, the donor strip is removed either with two parallel blades forming a single long, thin strip or with a single blade producing a long, thin oval: termed an ellipse. At NHI we generally prefer to use the first technique since there is more stability of the tissue when both surfaces are cut simultaneously. 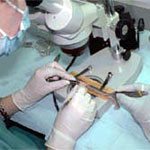 NHI staff performing “slivering”, the first part of stereo-microscopic dissection where the donor strip is divided into smaller sections by passing around follicular units to keep them intact. 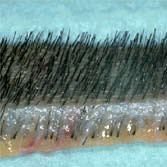 A close-up view of donor tissue obtained with single-strip harvesting. Note, the absence of follicular transection and preservation of intact follicular units.

The strip is then further divided into smaller sections using a dissecting stereo-microscope that allows total visual control over the procedure and avoids the unnecessary transection (cutting) of hair follicles that is inevitable with the multi-bladed knife. These sections are then dissected into individual follicular units by a team of NHI staff using the same stereo-microscope. You are welcome to observe the NHI team performing microscopic dissection by visiting our offices. Please check out the Open House section for more information.