While NHI previously used the ARTAS robot, we currently do not use the technology for our FUE procedures. A skilled surgeon can perform the surgery in less time and with more accuracy. Transplanted hair follicles have a much greater chance of survival if they spend less time outside of the scalp.
Schedule Virtual Consultation
If you would like to schedule a consultation with Dr. Jae Pak, please click on this link: Jae Pak MD Medical
*NHI Medical is no longer available for consultations or procedures.
Menu

What you need to know about FUE, Long Haired FUE, and The ARTAS® Robotic System 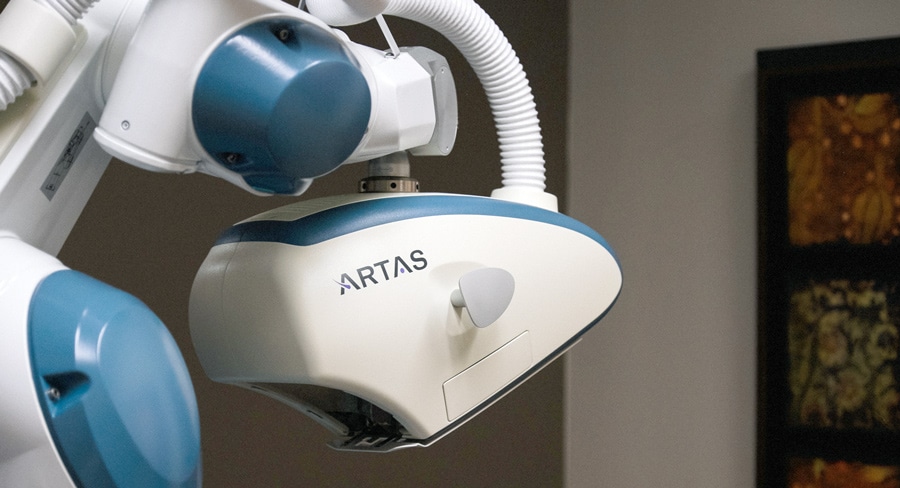 The History of FUE

Dr. William Rassman pioneered the Follicular Unit Excision (FUE) in mid-1995. He developed the FUE technique with strips that he was taking out during his regular surgical hair transplant procedure. He had the permission from his patients for this experimental work, and over the next few years, he worked with a series of punch designs to optimize the FUE process. In this process, he developed consistency in the quality of the grafts he obtained. In 1998, Dr. Jae Pak joined the development effort. They both realized that the FUE process, if it were to become a viable clinical technique, was a very tedious process, and it might be too difficult for many physicians. To address this, Dr. Pak used his engineering background to develop, with Dr. Rassman, a robot arm that would take the tedium out of doing the FUE in large quantities. Some primitive optics were incorporated into the robotic arm; however, as the manual systems they used became better and better, the robotic development was shelved.

Dr. Rassman realized that there were many key elements in performing a clinical FUE procedure, which included:

With the standardization of the four key elements above, a manuscript was written which summarized the FUE development. In 2002, Dr. Rassman presented his clinical and research experience on FUE surgery at the ISHRS annual meeting in Chicago, and at the same time, he published the first article ever written on FUE in the premier Journal Dermatologic Surgery, titled: “Follicular Unit Extraction: Minimally Invasive Surgery for Hair Transplantation” (Dermatologic Surgery 28:8-August 2002).

At the time of the presentation, Dr. Rassman gave out over 600 DVDs to the doctors in the audience. These DVDs contained good close-up videos of the FUE technique he had developed. No one, not even the authors of the article, could have anticipated the enthusiastic rush by surgeons from all over the world to offer FUE, nor the enthusiastic public acceptance of the technique. The DVD, unfortunately, became the only teaching modality available for the surgeon wanting to offer FUE surgeries. The industry had no time to develop a teaching process to train the doctors in proper FUE techniques.

In the first year, results from FUE worldwide showed massive failures of the technique, as untrained doctors had to develop a learning curve to master the FUE. The DVD showed it looking so simple that doctors never thought they would need training in the process. This learning curve, unfortunately, came at great expense to the patients who became victims of inexperienced surgical practice. After all, Dr. Rassman made it look so easy on the DVD. When the public heard about the FUE, they loved the idea of a new hair transplant approach that would not produce a linear scar. The concept of a minimally invasive surgery became so popular that more and more demand for the procedure appeared. Dr. Rassman’s FUE practice significantly increased as well; however, he did not have the uphill learning curve that the other doctors in the world had at that time.

By the end of 2003, Drs. Rassman and Pak saw the devastating results that were obtained from FUE worldwide, so they went back to their 1998 FUE robotic technology and submitted a series of patents for robotic hair transplantation, expecting that a robot might solve the technology dissemination problem. Two patents were granted in 2006, and these patents were eventually licensed to Restoration Robotics, Inc., which lead to the development of the ARTAS robot, in common use today. The ARTAS robot is the only robot used in the market today.

FUE now reflects over 50% of all hair transplants performed worldwide, and you can find surgeons all over the world routinely performing FUE on thousands of patients; however, like any new technology, abuses are common as the procedure is often performed isolated from the realities of the patient’s donor supply. FUE training is still a problem, and most surgeons have never been trained in FUE. With a strong market demand for FUE, the lack of training did not become an obstacle to entering the field. As a result, too many patients are now developing problems, like (1) donor site depletion, and (2) donor area balding from excessive FUE over-harvesting. This is potentiated by doctors who don’t understand the nuances of FUE’s impact on the donor area. Because of the minimally invasive nature of the surgery, non-physicians are also offering FUE with complications that can even lead to death from poor anesthetic techniques. But, the drive to make money, regardless of who is harmed, is not an obstacle, even for the ignorant non-physicians performing illegal FUE surgeries worldwide. It is now a situation where the patient must be on guard when investigating the FUE surgeon’s capabilities.

The following is a diagram used to secure our Robotic FUE patents: 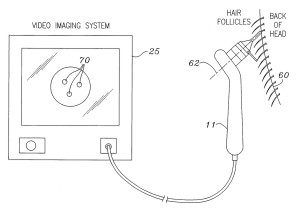 Drs. Rassman and Pak developed significant expertise in manual FUE prior to the original 2002 article when they were the only medical group performing and publishing on FUE in the world at the time. The instruments they developed in the process became the nidus for the creative development for many doctors, and, as a result, the FUE instrumentation has gotten better and better.